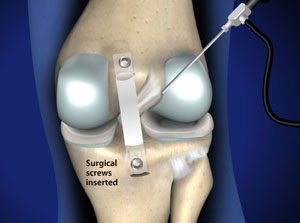 Posterior Cruciate Ligament (PCL) Reconstruction; the posterior cruciate ligament lies just behind the ACL at the back of the knee and also plays a major role in the stability of the knee joint. It also keeps the tibia from moving backwards too far. An injury to this ligament can happen in many ways but typically requires a powerful force such as a direct blow to the knee from the impact of the dashboard hitting the joint directly in a car crash. The reconstruction of this ligament involves replacing or repairing the damaged PCL ligament.

The surgery uses a graft to replace the ligament and the most common grafts are autografts, which is using a part of your own body such as the patellar tendon or the hamstring tendon. Another choice is the allograft tissue, which is taken from a cadaver.